Why do individuals resort to psychological terror at work – mobbing 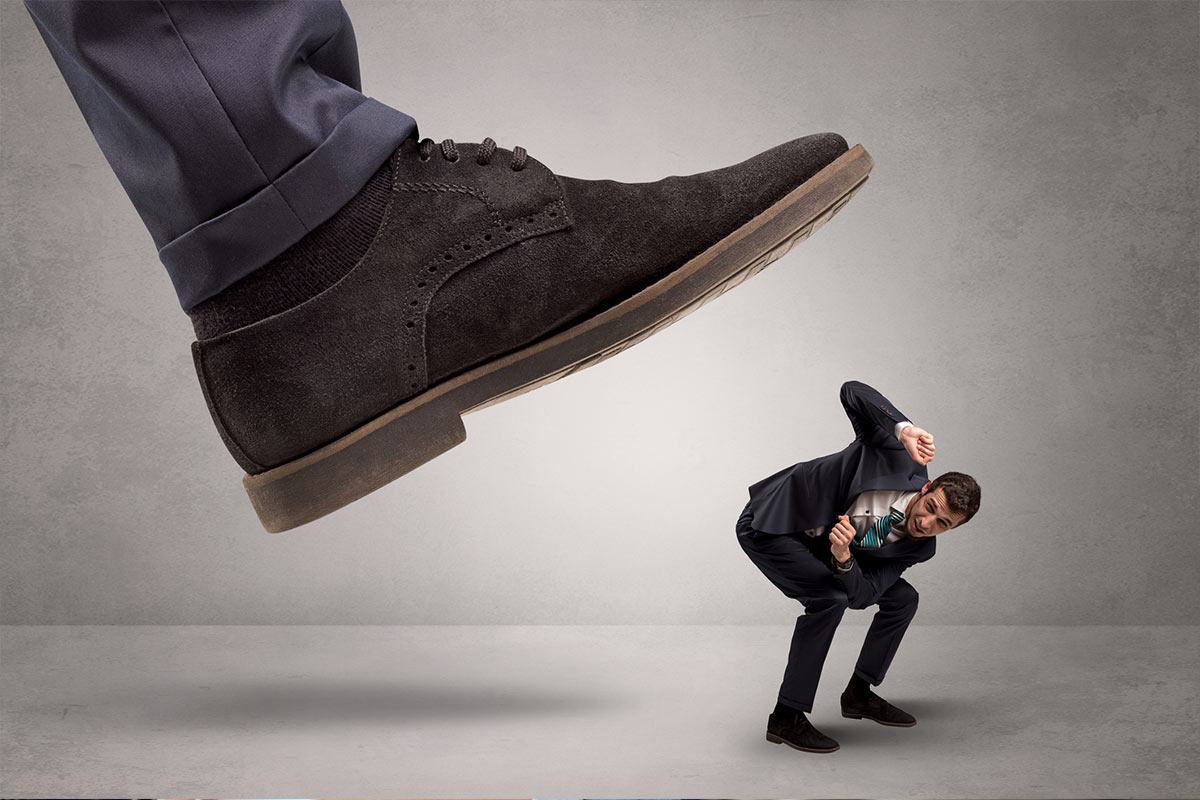 Maria was getting ready for work that morning. Her eyes were red when she looked in the mirror. She couldn’t sleep again. She didn’t like the way she looked. She tried applying makeup but her hands were shaking. She could barely bread. The feeling of fear was too strong again. She was getting ready to go to work. She thought about the possible unpleasantries that await her at work that day.

Now, she was in that workplace she wanted so much. She worked for a long time to move forward in her career. She became deputy editor in chief. But her dream job turned into a nightmare. Marko, her colleague, wanted to do the job that she was assigned to and he couldn’t stand the defeat.

She heard rumors spread by Marko and his friends at work. She endured hostility every day. She was humiliated and ridiculed. “Where did you leave the paperwork I gave you yesterday? You can’t do anything right! All you make is mistakes…”

Of course, Maria was a reliable worker and she did everything right. Despite that, she endured everyday attacks. When she entered the office, everyone would stop talking. She could see certain employees ignore her. When she left the office, she could hear laughter and people gossiping about her. Even though she was deputy editor in chief, she was never informed about the meetings she was supposed to partake in.

After a brief period of time and as a result of the psychological terror she endured, she became a different person. The abuse she endured at work took a toll on her personal life and her health. She was becoming weaker. She was unbalanced and abstracted. She kept withdrawing into herself. She was stressed out all the time because she didn’t know what kind of unpleasantries awaited her that day. She couldn’t understand why it was happening to her.

Psychological Terror in the Workplace

Those who become victims of attacks, bullying, and intimidation at work are in a difficult situation. Stress affects one’s mental and psychological health.

The tools bullies use vary from denying contact and information about open and concealed attacks on one’s appearance, reputation, and performance, to intimidating, blackmail, insulting, and humiliating.

A victim of violence can be treated like air and neglected. They are not greeted anymore, they are not invited to meetings, they are not informed about business activities, they are denied the information and disinformation. They are being shown that they are unwanted in every possible way so that the victim remains alone and embarrassed.

The bully attacks the reputation of the victim. They spread incorrect and offensive rumors about the victim which is part of psychological terror. The bully ridicules, mistreats, disrespects, and intimidates the victim. If the bully is the boss, then complex tasks deemed to lead to failure are given to the victim. During the performance, the bully continues to criticize and underestimate the work of the victim thus creating tremendous mental pressure.

In cases when the victim is being used as an object, a means for one’s personal self-praise, prestige, superiority, domination, attractiveness, and proving one’s worth, sexual violence is frequent. For the bully, sex is proof of ownership, of triumph, so they will do everything to weaken the victim and break their resistance. If they succeed, they feel excitement and joy, but anger and frustration if they don’t. Also, posting private photos and information online (Internet mobbing) is a popular tool to hurt the victim.

Alarming Signals Which Point to Mobbing

The following are the alarming signals which indicate that you are being attacked in the workplace and that someone is working against you:

Why Must a Mobbing Victim Defend Themselves?

If you are a victim of abuse and attacks in the workplace, you should not assume the role of the victim. It is the worst reaction to violence due to the negative and devastating impact bullying can have on your condition, your reputation, your self-confidence, your self-esteem, and your dignity. When your self-esteem and self-confidence are weakened, it makes it difficult for the victim to defend themselves from the bully. In time, this seriously affects both mental and physical health of the victim.

The effects of psychological attacks include:

Physical effects of violence include:

If the victim does not defend themselves from mobbing, they often resign or enter early retirement. Silence or lack of reaction can lead to strong anxiety and feeling of helplessness. On the other hand, if you are kind to the bully, it can indicate that you are psychologically weak or vulnerable and suitable for being a victim.

The example we provided could lead you to think that Maria’s colleague is only fighting for the workplace that she was given. However, there are many people who want certain jobs at work and who do not abuse their colleagues in higher positions.

If you are a victim of mobbing, it is useful to arm yourself with knowledge about potential reasons for attacks and the bully’s personality profile. In this case, knowledge is power!

You should know that a mentally healthy and emotionally stable person has no need nor desire to demonstrate destructive and aggressive behavior towards others. If you are under attack, you are probably dealing with pathology or a person frustrated for not having achieved anything in their life, a person who is unhappy with themselves and their life, even though it doesn’t seem that way at first. Such individuals suffer from a lack of self-esteem and self-confidence, individuals who cannot stand their reality.

In order to maintain an acceptable image of themselves, they have to nurture their negative self-esteem. Since they cannot stand those who are happy, attractive, who are moral or stand out in a positive way, unfortunately, they often start bullying them. They do it by intimidating, abusing, threatening, insulting, and blackmailing. For that purpose, the bully can ask friends and colleagues to help them, they will use lies and misrepresent themselves, they will manipulate and cheat. In order to include as many people as possible against a certain individual, they will pretend to be the victim to cause others to feel sorry for them and show compassion, while they use lies and frauds to portray the person they chose to be the victim as the aggressor.  All that in order to break the victim, hurt their self-esteem, make them fragile, humiliate them, their moral, their values, and qualities in front of others while they rise and feed their negative self-esteem.

Regardless of the real reasons for failure and discontent, what really leads a person to show their destructive behavior towards others who are completely innocent for their displeasure, lie in the following:

You should know that it’s a person who:

The painful and unpleasant feeling of envy is one of the main reasons for attacks. Other people’s success, a good financial situation, a good life or a quality that others could perceive as proof that you are better than them. If you are better than someone, that someone is proportionally worse than you. In that way, being aware of someone’s success is being aware of your own failure leading to a painful and unpleasant feeling of envy. The envious person then feels less worthy while the person they are envious of appears to be more worthy. The feeling of envy could be diminished if the said difference is diminished. That occurs when the person who envies you tries to belittle you or ruin your advantage over them. The bully will try to destroy your dignity, your reputation and honor, they will do anything to humiliate you and ruin you.

What to Do if You Are a Victim of These Attacks?

If you are a victim of an attack, it is highly important that you know how to behave and what to do in order to preserve your peace, dignity, and your physical and mental health.

Try to find a compromise with the person attacking you. Unfortunately, that often means that you cannot express your opinion openly, but you must develop certain diplomatic skills to agree with the attacker and preserve your own beliefs.

Try not to hurt their self-confidence and ignore their suggestions or worries in your conversation. If you always know better, you will be provoking an argument. You must be aware of this fact when dealing with such people.

What does the bully want to achieve?

Your explosive reaction! KEEP THAT IN MIND! That is exactly what they want to achieve. Use their own weapon against them because knowledge is power in this situation. Don’t react to the comical situation and don’t worry about the insults even if you do feel insulted. Use your inner strength and faith in yourself to remain standing firmly above things. Don’t give them what they want! Don’t give them the food because they seek attention through such explosive situations. It is important to remain tough in order to protect yourself. Set clear boundaries because bullies don’t respect boundaries. The reason they dislike boundaries is that they enjoy drama and boundaries preclude drama. That is why it is important to stick to your boundaries and never try to cross them in order to manipulate things. If you remove the barrier, they will acknowledge that as weakness and recidivation, and they will insist until they get what they want. Even if it is contrary to your usual ideas, be strong and persistent.

If the bullying is based on race, ethnic origin, religion, disability, age or sexual orientation, record it with your phone or document it in another way and then report it to the manager. If the attacks become frequent and aggressive, and the manager doesn’t do anything, report the case to the police in the presence of your lawyer.

Strategies for Your Physical and Emotional Well-being

Do you still see the attacker as a strong person, or as a sensitive and insecure individual instead? This will liberate you from the fear of this person because suddenly, you don’t see a strong individual but an aggrieved one.

How to develop personal impact through self-expression?